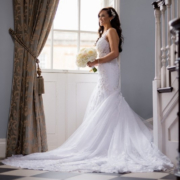 This spring we are super excited to be having trunk shows by two of our most loved designers: Martina Liana & Essense of Australia. What is a trunk show you ask? Well, during the Trunk Show event, which is held over a Saturday and Sunday, we will exclusively be given the newest wedding gowns from a designer to showcase to our brides-to-be. At select events, the designer and/or a representative will attend, giving the bride an opportunity to talk with them about the inspiration, trends and details behind the designs.

A trunk show can be a fantastic opportunity to see, try and buy next seasons wedding gowns before anyone else!

Here at Georgina Scott Bridal we regularly host glamorous trunk shows for the best wedding dress designers in the industry and this spring we have the following trunk show events booked in just for you!

At Georgina Scott Bridal, Martina Liana is always one of our most popular trunk show designers. Revealing their latest collection, we will be showcasing their best pieces for brides-to-be to view.

Martina Liana is the couture label from the Essense of Australia house and is the go-to-designer for a bride who wants to radiate confidence, glamour and style. Every cut, every embellishment, every consideration of a Martina Liana design is made with one idea in mind. When you select a Martina Liana creation, you wear something far more than just a wedding dress; you make a statement.

Essense of Australia are known for their sensational collection of wedding gowns that appeal to every bride, regardless of size or style—Essense of Australia offers everything from classic floral lace dresses and vintage-inspired trains, to sleek and simple gown silhouettes for the chic, modern bride.

Their dresses are inspired by the ethereal beauty and romantic spirit found in Australia’s natural wilderness. Combining elegant fabrics with intricate beading, these wedding gowns are designed for fashionable brides who appreciate the romance and tradition of classic bridal styles.

What’s so special about Essense of Australia is their EveryBody/EveryBride range. This is a large selection of wedding gowns from their collection which have been adapted to fit the curvier of figures and flatter ladies from size 18 to 36.

The superb fit, exquisite finishing and unmatched attention to detail of Essense of Australia wedding dresses ensure an unforgettable wedding-day look for every bride. From modern sheer cutouts and vintage styles with lace-adorned trains, to simpler, more streamlined silhouettes—Essense of Australia creates timeless, romantic wedding dresses that will be adored for years to come.

WHAT DO I NEED TO KNOW ABOUT TRUNK SHOWS?

There’s no better way to find your dream wedding dress! These exclusive events are planned months in advance. Call early as appointments book up quickly and the next show in your area may be months away. Many of the bridal gowns at the show are trunk show exclusives and will not be available after the event ends. Bring family and friends with you who are important to your dress buying decision because with the array of choices and the personal attention you will receive, there is an excellent chance you will want to purchase your dream wedding dress that day!

To book in to one of these trunk shows, call us on 01384 893656 or email us via enquiries@georginascottbridal.co.uk

Here at Georgina Scott Bridal we love nothing more than hearing stories from our brides and grooms, whether they be funny, sad or soppy! We love them all! We get to meet our couples in the middle of their journey together, so we become curious about the beginning; such as how they met and how the all important proposal went!

We get to know our brides so well, many become friends, and some of their beautiful stories bring us to tears. Happy tears of course!! And we wanted to share some of them with you. Whether you smile at them, cry or just have comfort from them, hearing from brides themselves that weddings can be full of ups and downs but all in all there is no need to stress… it all works out perfect in the end.

Here is the story of the fabulous Emma & Nathan (and little Felix!)

The Beginning & the Proposal…

“We’ve actually known each other for the best part of 10 years but only to say “Hi” to, we only met up properly after matching on Tinder of all places! Both Nathan and myself hated the app but happened upon each other on day, which was quite lucky as we’d never have approached each other otherwise as we’re both quite shy. Nathan had always been in relationships so i’d never actually looked at him in that way until that fateful evening on Tinder. We found out almost a year later on New Years Eve we were having a baby and our little Felix was born the following August. The July after we got married!”

“We’d spoken about getting married numerous times and i always said that id have to pick the ring as I’m ridiculously fussy! So one day Nathan suggested we go and see a jeweller we know in the Jewellery Quarter in Birmingham to have a look at rings to get an idea. Whist there i found the most amazing ring made with a Mandarin Garnet, which was really unusual but it was the only ring i felt actually suited me. So after a few tweaks off we went whilst the ring was being made. A few weeks later whilst i was changing Felix’s nappy (of all times he could have chosen!) Nathan got down on one knee and asked me to marry him, the response was of course yes!”

“I had it in my head that i wanted a Pronovias dress and saw that Georgina Scott Bridal stocked the brand so booked an appointment and tried on pretty much every dress in the shop but after having a baby my body shape totally changed so the dresses i thought would suit me no longer did. After one unsuccessful visit, albeit with some super helpful staff who were more than happy to let me try on dress after dress, i left without my dream dress. We were told to have a look in their Kingswinford store, which we did and i found my beautiful Eliza Jane Howell Dress”

“I hadn’t actually picked it out to try but my sister-in-law made me try it and it was one of the very few dresses i felt truly comfortable in. The pearl beading was exquisite and i really felt like a bride in it. Over the next few months i had numerous fittings and adjustments made, i even had the entire back of the dress redone but nothing was ever too much hassle for the ladies at Georgina Scott Bridal, Tracie genuinely wanted the dress to be as perfect as much as i did, which was really lovely.”

“I was on maternity leave at the time so did pretty much all of the planning in only 6 months whist feeding, changing and entertaining a young baby. I was adamant i was going to do it all by myself as i had a pretty exact idea of how i wanted everything but i realised a few months down the line that it would be virtually impossible to coordinate everything on the actual day myself so at that point i got the amazing wedding planner Krysta on board (@fortheloveofweddings) she was an absolute godsend and i really couldn’t have done it without her.”

What we would have done differently and our advice…

“I have to say that i wouldn’t have changed much as the day was beyond perfect but i maybe would have looked into the cost of things more (!) as i don’t think anyone realises just how expensive EVERYTHING to do with weddings is. Don’t try and do everything yourself. Its near enough impossible to coordinate all elements of a wedding on your own, no matter how organised you are. Wedding planners are a godsend, good ones are invaluable!”

Make up: Makeup by Roseanna

Winner of ‘Wedding Dress of the Year’ for the second year running!

Who are Essense of Australia?…

Essense of Australia was established 20 years ago in Perth, Australia and is lead by co-owners Wayne & Martine and has developed into a global success. They are the masters at bringing attention to detail along with dresses that have a superb fit with couture finishing. By having an Essense of Australia dress you will have a truly memorable wedding gown on your big day. With each Essense dress you will be getting luxurious fabric, sensational beading, lavish lace and head– turning sparkle (brought by authentic Swarovski crystals and diamantés).

Their dresses attract brides who are after a traditional style with a small twist. The classic lace details combined with illusion tulle, alluring flattering cut outs and dazzling sparkle provide just this. Their dresses are daring enough to turn-heads, but traditional enough to be respectable in a church ceremony. Giving brides the best of both worlds.

We weren’t at all surprised when Essense of Australia were crowned as the winner of ‘Wedding Dress of the Year’ for the second year running in 2018. We are so proud to hold this designer in our boutique, with beautiful dress after beautiful dress, our girls here get so excited when a new delivery arrives from Essense, knowing they will be pulling out another striking design! It’s no wonder it is one of our most asked about collections.

And the winner is…

The winning dress, D2322, is a style that holds all the key elements of what brides are looking for today –  romantic, demure yet sexy with a flattering shape; basically it’s a show-stopping design! It’s showered in eye-catching lace with a gorgeous lace feature on the upper back with a shape that shows off a brides’ feminine silhouette. The daring deep cuts and gentle sweetheart neckline make it the perfect choice for a bride who wants a traditional yet modern bridal gown for her wedding day.

We can not see what is next from this phenomenal designer! Based on the brand new dresses we have just received from them, we predict it will be spectacular things!

Click here to see all the Essense of Australia dresses we have in our beautiful boutique.

If you’d like to come and see our collection and try any dresses on, we always recommend an appointment. They aren’t always necessary but if you have an appointment then you will have priority over the dressing rooms.

You can make an appointment here

This site uses cookies to improve your user experience. By using this site you agree to these cookies being set. Find out more.